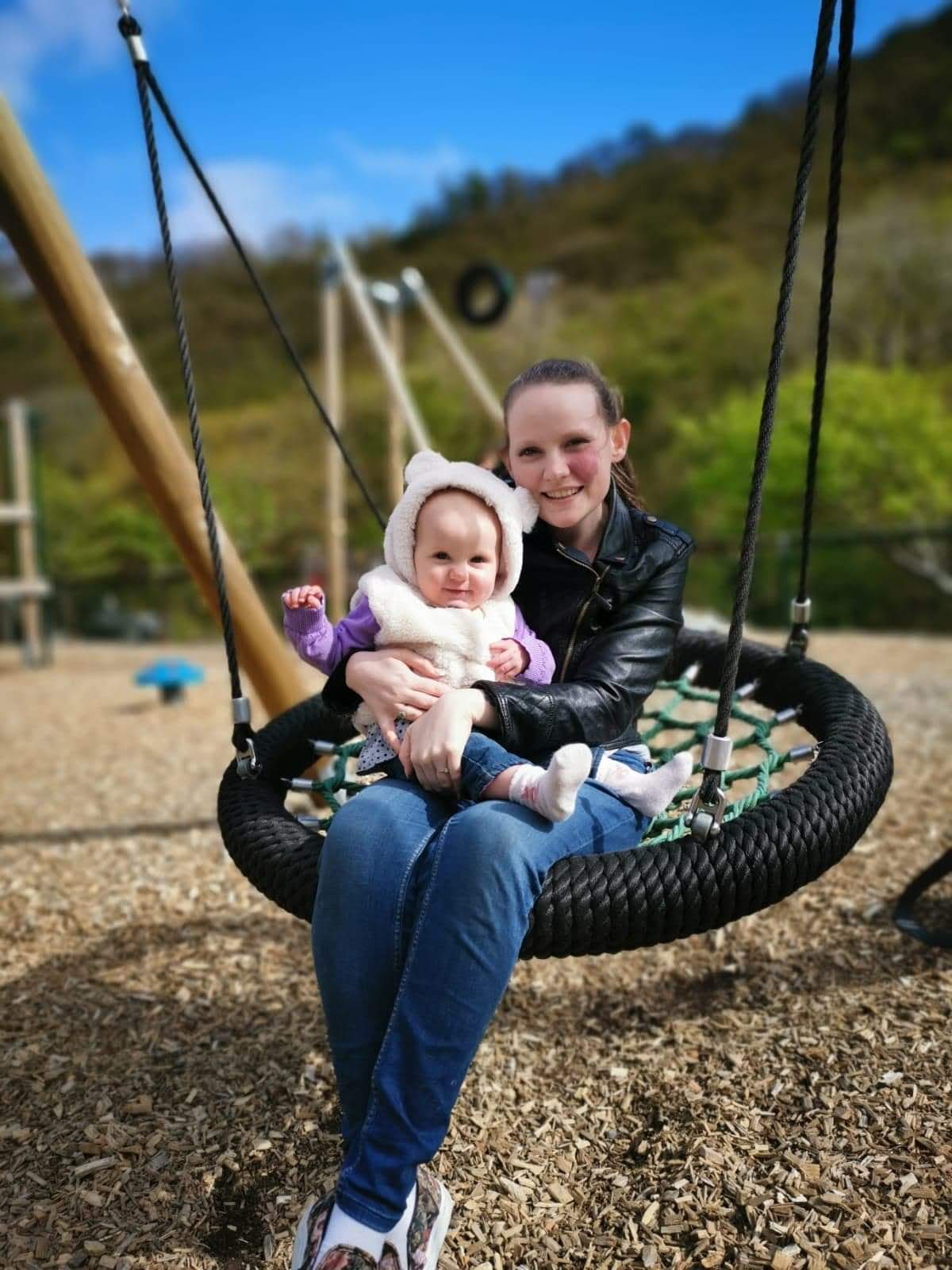 This week as part of my month of mental health/invisible illness awareness posts my friend Billie has kindly offered to share some of her story with me and my readers. Here is what she had to say:

My name is Billie & I am 23 years old. I live in Aberystwyth with my fiance James & nearly one year old daughter Aria Penelope. I am a part-time stay at home mum, and part-time working mum in a local bank. I also run a mummy/baby Instagram page which I am slowly growing!

I was first diagnosed with Anxiety at the age of 5. This is obviously so shocking to me now as this seems such a young age but as someone who has known me since I was that age recently told me, I had the world on my shoulders even then and always seemed rather serious. Anxiety ruled my life in a lot of ways, and then at some point the depression kicked in.

During my teen years I was turned away by doctors on a regular basis until my inevitable break down aged 18 where I was diagnosed with trauma from historical abuse, and bi-polar disorder. By this time I had been self harming for seven years and had got to the point where I could easily cut myself 200-300 times in one sitting.

What you don’t see in the above images is that the photo with Billie and her sisters was taken just after she had had a conversation about her abusive relationship. In the photo of Billie and her brother George, although they are both all smiles what you can’t see is under the long sleeves are old and new cuts and burns as this was at the height of Billie’s illness. You would never guess all that was going on on the surface.

At age 19 I met James & started working at the Bank I still work for now. My mental health still had bad spells but had been greatly improved with medication / treatment & these two positive events in my life.

Age 22 James & I lost a baby through miscarriage and I barely let myself grieve properly for fear of another breakdown, however we got through it together and a month later I was pregnant with Aria, our perfect rainbow.

Throughout my pregnancy (despite awful sickness that needed medical treatment, the discomfort of being so huge, pain in my joints/ back/ everywhere) I was on cloud nine. I had always wanted to be a mummy and finally it was coming true. A traumatic labour gave me a bit of a wobble, however my sheer happiness and utter love for my baby kept me strong. Due to my history I have a perinatal mental health team and they are wonderful. My anxiety has been a big player in my recent mental health and for that reason I am awaiting new treatment for my current mental state. Despite this however I am still over all feeling fantastic and in a much stronger place than 5 years ago.

Some days, there are no triggers. You can just wake up and realise “okay today’s an anxious day” however there are also noticeable things that bring on poor metal health in my case;

A big help is basic self care that helps you validate your self worth and to feel more human. Doing things like washing, doing my make up, putting clothes on rather than staying in PJs all day are all things I do to feel a little bit better about myself. I also find keeping productive and busy when I start to dip often fights off anything worse and prevents me from falling further into being unwell, for example tidying up a little around the house, getting out for a walk, doing some organising or cooking / cleaning.

Getting out of the house can also be such a big boost. However having said all of this, the biggest form of self care to me is listening to myself. I know what I’m capable of and what I need in order to feel more myself again. I’m not going to do something just because it worked last time, or someone I know found it really helpful. Having Aria really has been the biggest pick me up of my life, and having to paint on a smile and keep going for her has been the best treatment in many ways and quite often I’m smiling and laughing for real with her before I even realise what’s happening.

What is your opinion on medication and medical treatment for mental illness?

So, this has been a biggie. When I was first given medication I was tried on Fluoxitine, which is an antidepressant/SSRI. Because of my suicidal tendencies and what had developed into an addiction to self harm I was also given diazepam to basically sedate me for the dreaded 2 week period where new medication can aggravate those types of symptoms. Once that 2 weeks period was over my symptoms worsened and I was rapidly switching from one mood to the next within the same day and self harming frantically. I was seen by a psychiatrist who said because of my reaction to the anti-depressant and my family history he would suggest that I was suffering from some form of bi-polar and be better placed on a mood-stabiliser / anti-psychotic so I started Quetiapine. This was fantastic compared to my previous medication and I was on and off it successfully from the age of 18 to 22 when I became pregnant. I then stopped it completely and have been doing very well without it.

Now my Perinatal Mental Health team would like to start me on Sertraline & both CBT and specialised trauma counselling. I am awaiting an appointment later this month to alleviate my fears about returning to an SSRI drug, and on a waiting list for the therapies.

My main advice is something that has taken a long time for me to properly realise, understand and implement in my life. It’s a take on the saying “you are your own worst enemy”.

My feeling is, that if that is true and you hold that much power over yourself that you are your own worst enemy, then you must have the same power to be your biggest saviour and your best friend. Treat yourself with the same kindness, love & patience you would the most important people in your life because actually, one of the most important people in your life should be yourself.

That is so true! We should practice self love and self acceptance but if you can’t practice that just yet start by being kinder to yourself, in this society there is so much pressure for everything to be perfect but if something doesn’t go according to plan don’t be too hard in yourself.

Thank you so much to Billie for taking the time out of her hectic schedule to write this post for me and to tell us a bit of her story.

Do you struggle with your mental health? What’s your take on medication to help? What other advice would you give to others? Let me know in the comments.